What is particle image velocimetry? PIV is an optical method to visualize fluid flows. PIV can measure the velocity of fluids and reveal fluid properties. PIV is used in aerodynamics and hydrodynamics to  research how organisms swim, fly, and conduct fluids in the body and to design aircraft, submarines, cars, prosthetic hearts, etc.  New PIV Systems can cost as much as $100,000. You can build your own for less than $1,000. 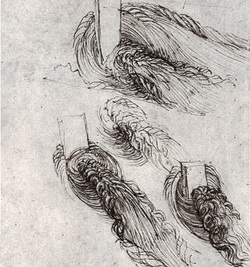 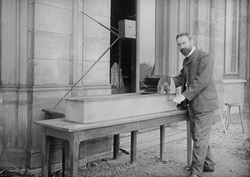 Ludwig Prandtl (1875-1953), a German scientist,  built a flow tunnel in sunlight, in which he photographed fluid flows. In 1903 he published, Fluid Flow in Very Little Friction, where he described the boundary layer. This study described the relationship of drag and streamlining, and gave a description of stall, which is the inverse relationship between wing angle of attack and lift.
Picture taken from - http://www.talkmoneycafe.com/?p=612

Notice the foil in the visible water flow and the vortices that have formed behind the foil.
Picture taken from - http://www.sciencebuzz.org/buzz-tags/ludwig-prandtl